There is something about being Amish that makes a child want the things that are not allowed — the things they see everybody else have (everybody being people who are not Amish). A child not distracted by worldly things has a lot of time to think up ways to acquire them. 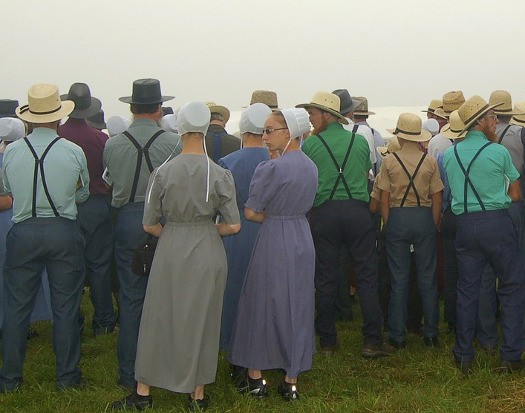 Fifty years ago, teenager Joe wanted a radio. And he needed money for that.

This was way before cellphones were invented. Stores sold dedicated radios that hooked up with radio stations via radio waves in the air.

The radio had to be what was called a pocket radio. It would be the right size to slip into his pants pocket wrapped inside a handkerchief — so it could be hidden from sight. A small radio wouldn't make much of a bulge.

The handkerchief would soften the radio's hard surface and edges. The bulge would look like he had wadded his handkerchief rather than what it was.

Radios were seriously outlawed by the Amish. Joe was unwilling to create any suspicion that would destroy his reputation of being a "good boy" that he had so carefully groomed.

Good boys aren't watched. Or not that much. Boys with a reputation for disrespecting the Amish beliefs were watched with critical eyes — constantly, by both siblings and parents.

Even a suspicion could ruin a reputation.

So he made his plans very, very carefully.

Joe didn't have any money of his own. Young Amish boys don't.

His dad had control of the family money. He knew to the last penny how much money was in the house. All the bills were in his wallet. The coins were in a jar within his rolltop desk.

Any missing money would throw suspicion on everybody! Theft just wasn't conceivable. Not in an Amish household.

Still, there was a way.

His dad went to town pretty much every week — unless it was haying or thrashing season, or corn husking time, or there was a winter blizzard. In the buggy, on the way home, he counted the money in his billfold.

But he didn't immediately count the coins in his pocket.

The buggy is not a smooth ride. It's rather bumpy on its steel-rimmed wooden wheels and the horse not dodging rocks and ruts. Further, one hand had to always be on the leather reins to control the horse.

Counting coins was not feasible when you were driving the buggy by yourself.

Generally, he got home just before it was time to commence chores. The counting had to wait. The coins went into the jar for attending to after milking and other evening chores.

During chores was when Joe made his move.

Not much could be swiped. More than about 10% of the volume in the jar would be noticeable, would raise suspicion. If he had any suspicion at all that something was amiss, his dad would count his coins immediately when he got home, regardless how late it was.

Five dimes take up about the same amount of space as a quarter. So Joe preferred them. But he couldn't take all the dimes, as it would leave a fishy disproportion.

It was during the milking part of the chores when he had the best opportunity. Everybody was out of the house helping.

He adjusted the speed of his milking so he would get done with a cow while everybody else was occupied with their own.

Even so, he had to be quick about it. Somebody could finish earlier than expected and notice he was missing.

Joe had an excuse handy, an excuse he could use only once without creating suspicion, that he thought he saw a lamp lit in the house and he went to see. Kerosene lamps should remain lit only with somebody present. The danger of the lamp starting a fire was too high.

But he never had to use that excuse. Not over several months of weekly filching.

Joe was good with his timing.

The little bit of money added up, week by week. And he finally had enough for the radio.

It was more money than he had ever had in his possession. Actually, it was the first time he had any money at all that he could call his own.

The next thing to figure out, Joe thought, is how to buy the radio without getting caught.