Will it come to this? The question dates the popcorn story, written during a period with drones becoming ever more popular, but not quite yet as obnoxious as one hazy view into the near future suggests. 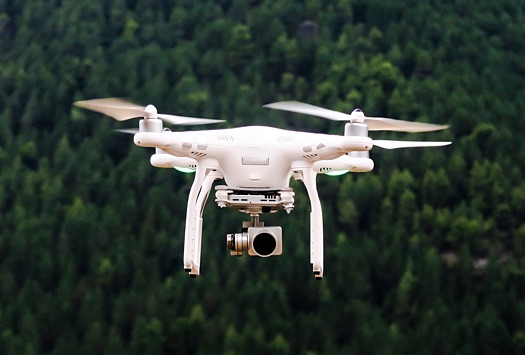 Drones were becoming more numerous every month — spying on people in their back yards, looking in their windows, stealing privacy. Or so people thought. But nobody had proof drones were doing those things.

Although the neighborhood had meetings, there was insufficient corroborating information to impel the neighborhood to do something about it. Drone hobbyists were reluctant to impose drone restrictions. Others resisted any changes, declaring they had nothing to hide.

The morning they found the photograph taped onto a store window, reluctance and resistance went poof. Everyone was united with astounding suddenness.

The picture was of Mrs. Commonwealth, their friendliest and universally liked neighbor, taken through her bedroom window from about treetop level.

Parents imagined their children cavorting in their rooms without appropriate clothes. People realized they must forevermore ensure they wear appropriate bathing suits when sunning within their own high-fenced backyards. Residents cringed, realizing how vulnerable they've already been with their private activities.

But what to do?

Drones are legal. They go wherever they want. Shooting them down could result in criminal charges.

A student solved it during a moment of creative association. She realized the static wave generator in her science class could become a drone repellent, assuming neighborhood-wide particiption.

With enthusiastic cooperation, every house created a science lab to investigate nuances of static field generation. The most unique findings would be awarded a certificate of recognition.

Soon, the neighborhood was drone free.

The student received a home-made certificate of appreciation signed by every family in the neighborhood. Plus, she got to spend an afternoon with Mrs. Commonwealth, a person she admired, drinking tea and nibbling biscuits.