The Unintended Recipe story is an exercise in conveying characteristics through dialog. The story is writing practice, as are many of my popcorn stories — a preparation for writing larger fiction works. 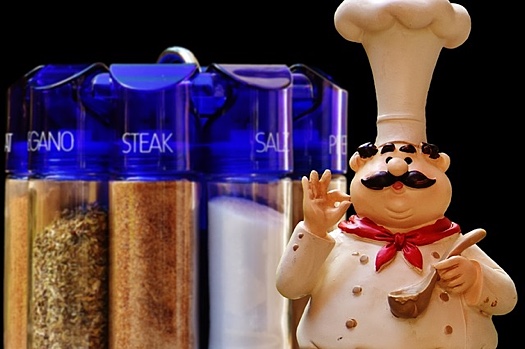 "All you have to do, young lady, is watch me and you'll learn how to cook. But you gotta pay attention."

Here she was, barely a month past 9 years old, dutifully nodding while Dad went on and on about his culinary feats.

"Applesauce, for example, is just applesauce."

He got some applesauce from the refrigerator and poured about half a cup from the jar into a small bowl -- talking all the while about the history of applesauce and how it was made.

"It's just applesauce. Until we do something with it. It was the invention of cinnamon that changed applesauce."

He turned to the spice rack behind him and retrieved a shaker he thought was cinnamon.

His daughter noticed "Cayenne" on the label. But he didn't.

"Did you know cinnamon is the bark of a tree? It's a special kind of tree. They peel the bark and grind it into a powder. In other words, cinnamon is real sawdust."

His daughter raised her hand to speak, to tell him about his cinnamon-cayenne switch.

"Don't interrupt while I'm showing you how something is done. You can ask questions later."

She nodded, even though she figured a different demonstration would be launched before "later" ever had a chance to manifest.

Shaking some on the applesauce, he instructed, "Sprinkle only a little bit on top. It's easy to want a lot because it's so good. But if you put too much on, it'll glom up on you. Remember, it's sawdust."

He reached into a kitchen drawer below the spice rack and brought out a spoon.

While her dad puts away the jar of applesauce, she immediately and dutifully tasted the cayenne-topped applesauce in the bowl -- with more than a little apprehension.

But it was good!

Different, to be sure. It was both cayenne peppery and applesauce sweet, a wonderful taste bud stimulating combination.

"Good, huh?" he interrupted. "Go ahead and finish it. I snuck some earlier for myself."

He put the cayenne-he-thinks-is-cinnamon shaker back into the spice rack.

She quickly finished the bowl. Then sat back, smiling.

"Now off you go. It's time for me to take this apron off and go play poker with the boys."