Sometimes pleasant things happen during what could otherwise be a boring or uneventful period. 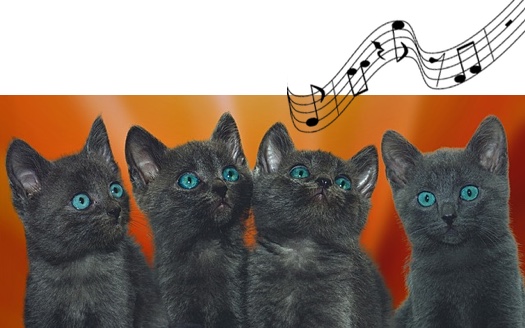 There we were, sitting in a waiting room, when the woman seated in a nearby chair turned to us and started talking.

"They'll be calling me the Cat Lady," she said. "And I'll wear the title like a badge of honor."

She beamed with such a happy smile we couldn't help but smile back.

Then she proceeded to tell us how she rescued 4 kittens from under a porch where "they surely would have died this winter."

"Three are males," she said. "And the smallest one is a female."

"I named them John, Paul, Ringo, and Georgie," she laughed.

There was a pause in her narrative, with a radiant introspection. She was mentally with her kittens, no doubt.

"The other two I have are boys. They're both grown. They have gentle natures so I knew there would be no problem. And I was right. They're getting used to this invasion of their house and I can see they're accepting it."

"So Georgie is the only girl."

There was some more silent introspection.

"She's so cute. Sometimes she crawls up my blouse and puts her lips on mine. I don't know why she does that, but she's a special kitten."

The smile on the woman's face was akin to the smile of a mother reviewing the goodness of a special child.

"The other two were declawed. But I don't think I will declaw these four. It's kinda cruel, don't you think?"

At a nod from us, she continued with, "Furniture is just furniture. It's replaceable."

At that moment, her name was called. She smiled at us and proceeded to her appointment.