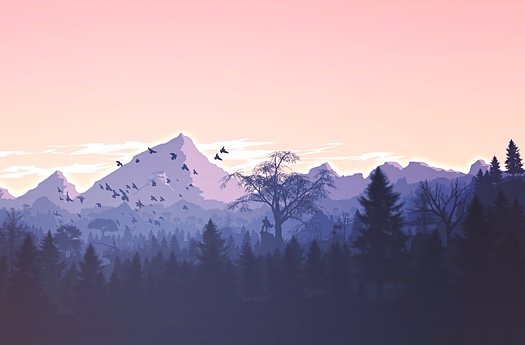 Suddenly, there was a cacophony in the forest toward the mountain. Dozens of crows were flying about and cawing and flapping their wings like their whole world was coming to an end.

Arabelle knew crows tend to exaggerate. But she floated over that way to see what the commotion was all about.

When she got there, there was a snake in a tree by a crow's nest. The nest had one egg left.

When the snake saw Arabelle, it quickly hid on the other side of the branch and slithered down to the ground.

But Arabelle had seen the snake.

"Oh, just going about my own business. You know, doing snake things."

"Well, I think the crows think you're going after their eggs. That's why there's all the commotion."

Sneaky sneaked a peak around the trunk of the tree and up to the sky where the crows were flying around like they're having a conniption.

"But I'm not hungry," says Sneaky.

Well, of course not," says Arabelle. "You already ate two of their eggs."

"Well, Sneaky, take a look at your middle. It's stretched around two objects inside your stomach that are the same size as crow eggs."

Sneaky twisted around and looked at his belly.

After a hesitation, Sneaky said, "Well, okay, you caught me. But I'm not going to blush. Snakes don't blush!"

Then, Arabelle had an idea. "How about slithering over into that creek bed and hide under the bank so the crows can't see you? Then they can go back to their nests and sit on their eggs and feel like everything is right in their world."

When no response came from Sneaky, Arabelle continues with, "I'll stay here for a while. It's nice here, deep in the forest."

Sneaky hissed. "You don't have to stay here! I won't bother them anymore."

"Oh, but I want to!" says Arabelle. "The crows are my friends and I want to visit with them."

It was then that Sneaky realized there was nothing he could do about Arabelle. So he slithered off into the rocks to hunt for insects.