An emergency prompts Arabelle to do something she hadn't previously been aware that she could — teleporting from one location to another. 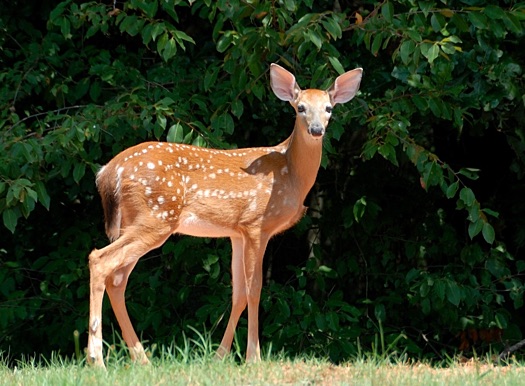 A fawn and its mother were eating grass in a clearing in the woods. Arabelle floated nearby.

In the clearing was a wall, the remains of a house that had long ago disintegrated.

The fawn sniffed at the wall and walked around it. Suddenly, it disappeared. In the fawns place was a puff of dust.

Alarmed, Arabelle floated over. The fawn was in what used to be the basement of the house. Over the years, the basement had filled with branches and assorted debris. The fawn had walked upon it and sunk down.

The fawn tried to get out, but the hole was too deep. The mother was frantic. And Arabelle, at this point of her experience with being a spirit, couldn't affect physical things.

But she could think.

Momma deer snorted, tail high. "No! They shoot people like us. And eat us!"

"I think I can make them do what I want," said Arabelle. "When you smell the human coming, go hide in the trees."

Arabelle went poof from the clearing and reappeared at the human's house.

There was a dog. At first, he growled. Then, when he realized his owner would be unable to see Arabelle, he suddenly got friendly.

"A fawn has fallen into a hole in that clearing nearby. Make your owner follow you. I'll show you where."

The dog released a cacophony of barks and the owner came running.

"Well," thought the owner. "It's pretty obvious he wants me to follow him!"

They arrived at the clearing, the owner nearly out of breath.

"Oh, you want me to get that fawn out of the basement, huh?"

"I wonder how of all the possibilities in the world you knew it was trapped here."

The dog's owner lifted the fawn out of the basement. The fawn ran into the trees where its mother was hiding.

"Thank you, dog!" said Arabelle. "Is there any way you can thank your owner for me?"

The dog responded by slurping his huge, wet tongue across his owner's face.