Arabelle is in helping mode again. Realizing who can use a bit of help that she can provide seems to have become second nature for her. 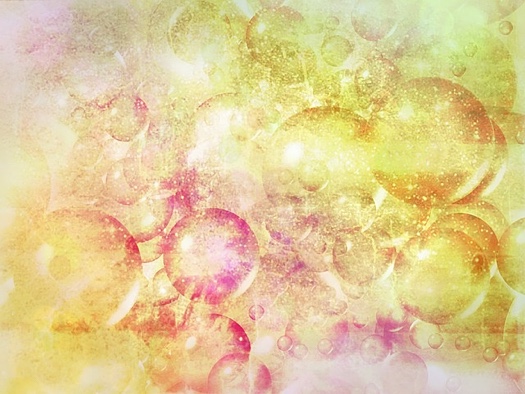 She was standing at the kitchen sink, washing dishes. There were suds, composed of thousands of teensy-weensy bubbles.

You could tell she was a bit anxious about something. We don't really need to know what about. It was personal.

Actually, more than a bit anxious. There was so much anxiety she had paused, immersed in a tense thought pattern.

A few of the bubbles were larger than the rest. One of those got bigger still. And bigger. And still bigger. Bigger until it was about the size of a golf ball.

Slowly, the big bubble rose above the rest of the suds.

She noticed, but didn't pay particular attention. Her focus was still on the anxiety-saturated scene in her mind.

The bubble continued rising. Ever so slowly.

When the bubble was about a hand-width above the rest of the suds, she wrested her attention from her mental workings and fixed it on the bubble.

The bubble continued to rise. It stopped in front of her, just far enough away so her eyes could fully focus on it.

And there, sitting on the bubble, was a fairy.

"My name is Arabelle", said the fairy.

There was a period of stunned silence before the lady said, "You look like a fairy!"

"Remember this: Because you saw me it is proof you are magic inside. Otherwise, you would never have seen me!"

Arabelle carried on, "You have incontrovertible proof. No thoughts or beliefs or words can erase the fact. Even when you momentarily forget it, the magic is still there, ever patiently waiting for you to remember again."

The lady leaned forward and kissed the bubble. The bubble popped.

Hovering on her wings, Arabelle threw a kiss to the lady. Then she slowly flew backward while waving her little arm in farewell.

Just as she became too small to see, there was a tiny flash of light.

The lady smiled. There was something soothing about knowing she was magic inside.

Not always, but often, from that day on, she remembered her visit from the fairy and felt content.

Send private note to author.
Use this form to send a private note to Will Bontrager, the author of Arabelle - Magic Bubble.
Arabelle - Magic Bubble
Will Bontrager
https://willbontrager.com/popcorn-stories/arabelle_magic-bubble.php
44.192.65.228
CCBot/2.0 (https://commoncrawl.org/faq/)
Your message:
Your email address (if reply desired):
Processing…