A Fresh Egg From the Henhouse

A Short Cooking Lesson From Mom

This is a 60-year-old memory and I am fairly certain it was a cake Mom was making. If it wasn't a cake, it was something else I was intensely interested in. Certainly it was something that would taste sweet, perhaps cupcakes.

Mom was making a cake. She was mixing the batter and I was watching.

It was summer and I was a tyke, maybe 4 or 5 years old. Less than 6, or I would have been doing chores for Dad.

Cooking was a magical experience for me. You mixed things together and, when you cooked them, they changed themselves into something that was good to eat.

Mom was sitting on a chair, the mixing bowl in her lap. A long, loose, Amish style dress and a huge apron can make a wonderful nest for a mixing bowl.

The bowl was tilted forward so I could stand there and watch the stirring — to see how it was done. You had to stir slow, I learned, so the flour doesn't whoosh out of the bowl. When all the flour is damp, then you can stir faster.

"William, this would come out better with another egg in it. So it doesn't fall apart after it's baked."

"Go and see if a chicken laid a egg since this morning. If you find one, bring it in."

This was going to be fun!

"But don't scare the chickens, William!" I heard on my way out the screen door.

Well, serenity of chickens was no longer on my mind when I burst into the henhouse and startled the occupants. Alarmed chickens rushed out of what the moment before had been a secure place to relax, cackle with each other, and lay eggs.

My mind was focused on finding an egg. Mom depended on me!

I did find one, eventually, but in a pile of straw on the floor, not inside a box Dad had built for the chickens to lay eggs in.

"Even here in the kitchen," she continued, "I heard the chickens squawk."

"Oh, yes, I forgot. But, Mom, they were all eating outside and not scared. They didn't pay any attention to me. And some went back in."

"I forgot to tell you why it's important not to scare the chickens," Mom said. "When they don't get scared, they lay more eggs."

"OK, Mom," I said, feeling somewhat chagrined. Still, the reprimand took only a little away from the exitement of finding the egg. 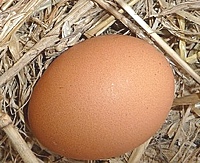 "It wasn't in the laying box, Mom. I found it in the pile of straw."

"Oh, maybe I missed it this morning. We'll just see if the egg is still good before we put it in the batter."

Mom broke the egg into a soup bowl and smelled it.

"It smells fresh," she said.

Lowering the bowl to me, she said, "Does it smell fresh to you?"

I sniffed the egg. It did indeed smell fresh, or at least what I imagined fresh would smell like — now that Mom had identified fresh-egg smell.

Being a fresh egg, it went into the batter bowl.

"William, maybe you could go out and scatter one handful of corn for the chickens," Mom said, emphasizing the word "one".

She continued, "So they know you didn't mean to scare them."

"Yes, Mom!" I said as I hurried out the screen door.

The outdoors had as much appeal as cooking did.

Soon, a trail of ants had to detour around a finger stuck right in the middle of their path. Not long thereafter, a spider discovered its way blocked by what was, from its point of view, a gigantic barrier — a little boy's hand. The spider refused to go around the hand, however, but crawled up and over instead. Presently, it was discovered that when a boy watches steadily, the clouds make interesting shapes as they meander across a sky dotted with others of their kind.

The chickens cackled contentedly among themselves. They had lots of feed and got along fine without an extra little boy-sized handful of corn.